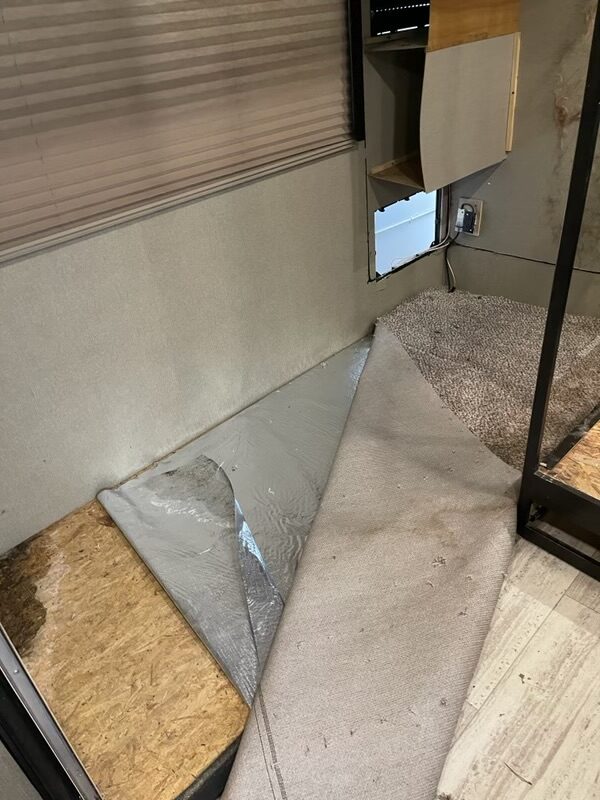 We had electrical problems with the slide and the jack at the end of our season in 2021, so we made an appointment with our mobile RV repair person, Daniel Lightcap, to come to our house in March. He discovered why our slide would start slowing halfway in and finish at a crawl, occasionally not closing all the way.

After ruling out any electrical and slide motor problems Dan looked underneath the slide on the outside. The black membrane was damaged in the back corner of the slide and the subfloor was noticeably bowed. We delivered our camper to Dan’s shop, Man of Steele RV Repair in Loganville, GA. He had our camper for about a month, but was timely in getting the job done before our next camping trip. The wood had to be ordered and picked up in Brunswick, GA. The carpet was ordered from Grand Design and had a three-week lead time.

Daniel is going to come to our house to put the new carpet back into the camper and make sure the two slide motors are synced correctly. He found that water was entering the camper where the metal strips anchoring the roof membrane attached to the slideout. The dealership used silicone to seal the filon siding and Daniel recommended using ProFlex. He also found multiple screws that were rusted or broken and replaced them.

As we were packing up to leave for our final trip of the 2021 season at Red Top Mountain State Park our slide got off the tracks. I was pulling the slide in and it stopped about half a foot short of where it needed to be. I immediately put the slide back out and waited until Heather got home from work. There wasn’t much in the manual about what to do if this happens, but Heather did figure out how to manually reset the slide.

The first time we brought the slide in, one of us had to be on the outside and push it in as the other person pushed the button on the control panel inside. Manually resetting the slide did not immediately fix our problem. Once the problem with the jack occurred, we figured the cause of this was that the battery needed to be replaced. Our camper is about 5 years old, so that made sense.

Heather figured out that our slide had to relearn how far it needed to come in to be completely closed. We got the directions for that at (call-out the name of the video and link). Once we completed those steps it fixed our problem with the slide. We’ve added greasing the slide before the next season to our to-do list.

Once we got the slide all the way in we continued with our packing process. We successfully hooked up the truck to the camper, but then the jack died as it was time to raise it off the ground. The lights on top of the jack started blinking and it would not work even if the camper was hooked up to power. We manually raised the jack, but realize it would be a problem unhooking from the truck once we were in our campsite. Instead of manually turning the jack, we took the hitch lock out and allowed the hitch to fall when pulling the truck forward.

I searched this issue on the Grand Design facebook groups and found a post about a fuse needing to be tightened or replaced by the jack. This fuse is located under the nose of the camper—follow wires from jack and you’ll find a 30-amp fuse. We did not have a replacement fuse that size, but thankfully all we had to do was pull it out and put it back in.

After our long trip to Florida, we got back home to find our fridge was not switching to electric—it would only run on propane. We tried to troubleshoot a few different things: First we replaced the fuse, but no change. Second, we tried a new electric cord to see if the fridge wasn’t pulling enough. Lastly, we checked behind the fridge to check the outlet.

Pulling the cover off the vent off was not hard, but we did need to be careful not to break the plastic. It was really dirty behind the fridge so we spent a little bit of time vacuuming the dust and dirt. The power cord had a good connection to the fridge so we decided to check the power on the outlet. I tried to plug in a fan and sure enough the outlet wasn’t working. Campers Inn is right down the road from our house and they carried this specific part to replace the outlet. Heather completed the job herself in just a couple of minutes.

We park our camper right next to the house when we are not using it. Our driveway is sloped down from the road to the house and levels off next to the house. Our 2016 diesel Colorado does not have problems getting the camper out of the yard, no matter the weather. In 2017 we were leaving for a long weekend in SC with college friends. The Colorado had to go to the shop for a recall and they loaned us a truck knowing we were using it to tow the camper for the weekend. The plan was to leave after work, however the Silverado 1500 that they loaned us was 2-wheel drive and it started to monsoon as we were packing up. Of course the truck gets stuck. It took us hours to get the truck out with multiple trips to Home Depot for sand.

This situation happened again when we were leaving for our trip to Florida. Heather’s Father let us borrow his F250 for more space inside the cab on the long drive. The F250 has 4-wheel drive and quite a bit more towing capacity, but it also weighs a lot more. Sure enough it got stuck in the wet grass. We had to unhook the camper and switch the hitch to the Colorado. Used the Colorado to pull the camper into the street and then hook the F250 back up to the Colorado. This is one of the many reasons we call it the “Little Diesel that Could.”

At the beginning of the 2021 season we opened up the camper and noticed a leak in the bedroom with a brown stain down the wall. I climbed onto the roof and found about a 1’x1’ soft spot near the vent to the bedroom at the front of the camper. Looking closer we found the smallest slit (about as wide as a nickel) where the membrane was damaged and water got in.

I put together a detailed post with lots of photos of the roof repair that RV Roof Atlanta did here.